Bit new to 3D modelling, and this software especially.

I'm attempting to recreate some chess pieces as a first project. Most of it's pretty straightforward with the lathe tools (which are incredible btw). I'm getting stuck trying to recreate the king's head as seen here:

Specifically, those concave grooves of the crown. Not quite sure how to accomplish that in Curvy, or if it's even possible (maybe use Blender for that, but figure I would ask first)

Basically, flattened cylinders rotated round one another to make the base; for the concave curve, I isolated part of a cylinder (deleting the rest via mesh select) and inverted it.

However this leaves me with a gap between the concave curve and the crown base, seen here:

I'm at a loss how to stitch that bit up. I was hoping that joining them together as a single object and using a command like 'stitch holes' might do the trick, but no dice. Would love to know how, or if there's a simpler/more elegant solution to tackling this kind of thing. This is the best I've gotten with random experimentation.
Top

There are lots of ways to achieve this effect

First off I'd ignore the dents and draw the full shape with a lathe. Then go back to add the dents.

This one uses "Mesh/Voxel Subtract Children" 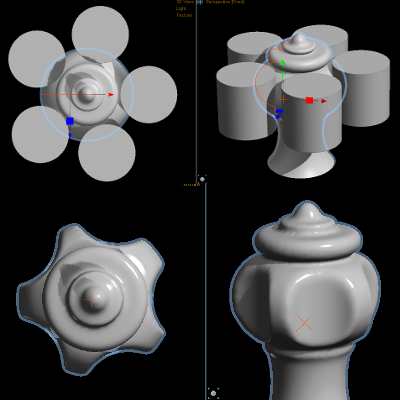 After making it I realised it would have been better if I'd made the dented section as small as possible, and left the parts above and below as simple lathes (You can make the Voxel settings use a higher resolution for a crisper edge, and you will probably have to smooth the subtracted dents to make them look the best)

This technique and alternatives are here in the docs:
http://www.curvy3d.com/docs3.0/menu-ref ... -menu.html

"Cut From Parent" would work... but in 3.0 Cylinders don't have enough subdivisions to cut nicely. A Cylinder made out of a lathe would work fine. Indeed "Cut From Parent" follows a similar track to what you were trying to do - effectively clipping parts out of two meshes then stitching the holes back together - but to clip the meshes they need to have a fine mesh otherwise you lose big chunks of the model. You can still do this by hand... but I recommend the Voxel tool this time.

There are in fact endless ways to do this - I've added at least 3 new ways in the new 4.0 build! It is a common issue

Oh, that's awesome! Thanks a lot, can't wait to try this out.
Top

That is a great subject for a first sculpt too! Each of the standard chess pieces offers somewhat different sculpting challenges.

(You are now officially through the "moderator filter", so your posts should now show up immediately too)
Top