I've been playing with Sculptris style dynamic meshing, with a view to using it for some new sculpting features.

The idea is to add triangles near to the area you are painting, leaving the rest of the mesh lower resolution.

I think I have the algorithm working well - I just have to optimise the code to get it running faster on larger meshes.

At the very least this will enable a soft "add subdivision" brush to carefully add resolution where needed to existing Curvy models... and at best it will help add a new wave of editing features - similar to the way you might paint with layers and filters in 2D. 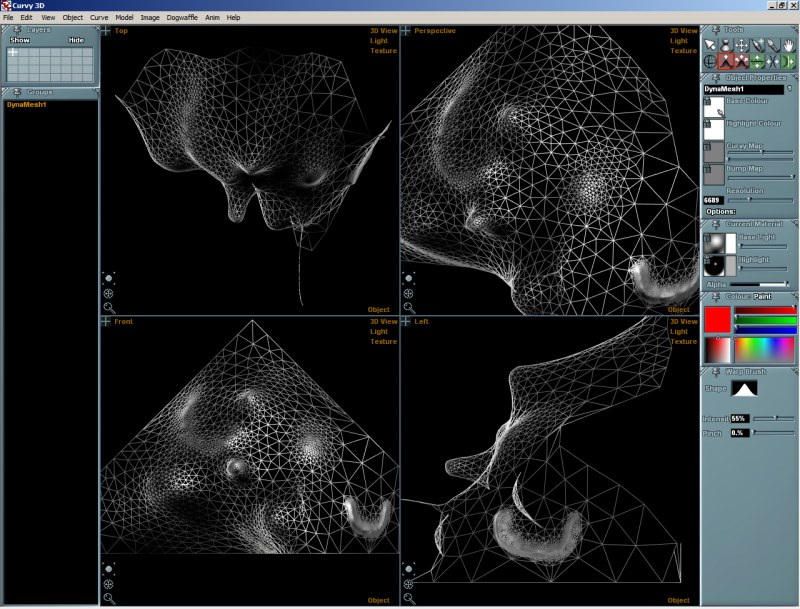 Neat! Looking forward to trying the new features when you have a build ready for test. The painting part reminds me of zbrush's drop feature where you go from 3d to 2d.5. I'm probably thinking about this the wrong way heh.
C is missing : Scream's pain of Clicking dost my Keyboard a Thinkin'. I need a new Laptop.
Top

More trying out the new dynamic meshes. I now can convert to and from the old mesh format so any Curvy object can be used for dynamic meshing.

Seeing how easy it is now to add detail to a low-poly starting mesh it makes most of my old style objects seem very over tessellated. I think a triangle reduction tool would be useful (and relatively straight forward).

I also have to work on soft selections and new brush types to make the most of this new technology. 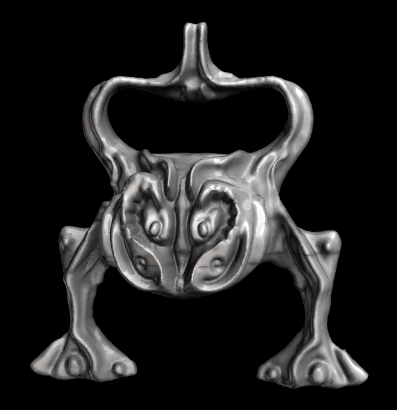 This is a slightly more real example, I merged some lathes to create my base shape - but this time I used only a "Rough" grid size for the Merge.

As you can see the dynamic detail brushes have added small detail to the face and eyes while leaving the body at the rough resolution. 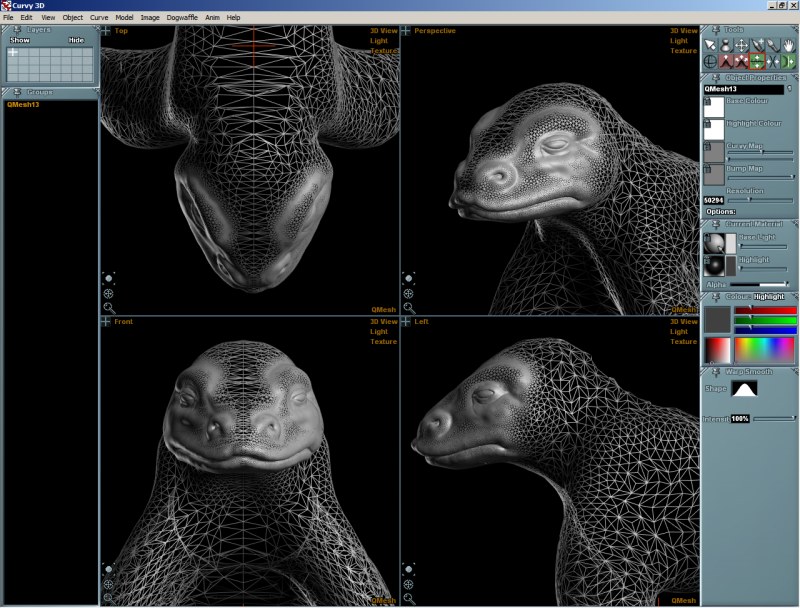 Wow. That is pretty cool. I like where you have taken this.
C is missing : Scream's pain of Clicking dost my Keyboard a Thinkin'. I need a new Laptop.
Top

Looks to have some very impressive upgrades....
Top

You might want to take a look at what 3D-coat has done with implementing their own dynamic tessellation implementation called Live clay... It's a self healing mesh... pretty cool. It's still kind of rough around the edges in my opinion, but still cool.
Top

pie in the sky

Of course my idea of an ideal mesh for sculpting would be self-optimizing (automatically dynamically adding and removing vertices needed to portray the given level of detail in the model)/self-healing and have a method for performing wonderfully smooth resulting boolean operations. The only issue I have with dynamic tesselation mesh is that it's too easy to get way more mesh than intended and bog everything down unintentionally. A hotkey to activate it only when you absolutely need more resolution added would be a good way to work around that without having to switch tools though. Most sculpting pakages that use dynamic tesselation have a tool that can locally reduce vertices in a mesh as well, but I've yet to try any that work very smoothly. 3D coat is the closest so far in my opinion. I'm lucky enough to have both ZBrush and 3D Coat, but I love the idea of quickly being able to "draw" in geometry which is which is why I like Curvy 3D.

It'd be cool to see functionality similar to those in this http://www.youtube.com/watch?v=W0XGkS7zebo video at some point too. Though I have no clue whether that would really be possible. I haven't seen any software that actually incorporates the methods demonstrated. Looks like a fun way to quickly produce base models for further organic modelling though. It'd be even better with bezier and spline control options. As it stands, looks very intuitive for very basic modelling for further sculpting in other software. It would also be interesting to see what might be possible if various options for symmetry were added.

I'd be curious to know what you think of it if you watch the video Simon.

Correction, I think I found software using the code here http://www-ui.is.s.u-tokyo.ac.jp/~takeo ... index.html I'm going to play with it to see if it might be complimentary. Feel free to do so yourself.
Top

"Teddy" was the first great sketch modeller - over ten years ago. Cool idea, but unclear how helpful it would be for day to day usage.

Fibremesh looks very much like a really early version of Curvy - as it turned out it was not helpful defining everything with curves, being easier to sketch large forms then detail them with brushes and other tools.
Top

I know that it's no good for detailing, but cool for rapid shaping. Did you ever see this related idea though http://cs.gmu.edu/~ygingold/rigmesh/ ?
Top

Rigmesh looks cool (new to me). It has a natural workflow and a good looking result. I wonder if it will get turned into a commercial app.
Top

You can download an experimental test version to play with here. http://forums.cgsociety.org/showthread.php?t=1050475 It's still a little rough, but I think the potential is there. I'm not sure what their long term plans are though. So far it seems to be an educational experiment. The interface is sparse, mostly relying on keyboard shortcuts provided in the read me, but it is fun to play with. Some people in the forum from for iClone have actually managed to animate models with a little tweaking. The rigging apparently ports into Maya as well. I can't speak for that though as I do not have Maya.
Top
Post Reply
16 posts